Google ‘s Theme Holiday logos i.e. doodles have always been fun, very creative ,   colorful and eye catching.  Doodles are very well designed and crafted changes made to the the Google logo without disturbing its original ethos to  celebrate holidays, anniversaries, and the lives of famous artists and scientists worldwide  .  Doodle was conceived in 1999  when Google founders Larry and Sergey  played around a bit  with Google’s logo to  send a message to its users that they are out of office and same was  overwhelmingly  received by its users .  In 2000, they had asked Dennis Hwang (who is a chief doodler  now then the  intern)   to design a doodle for Bastille day . Since then , Doodle is a regular feature on Google search engine to celebrate wide range of  Events ,  Holidays, important dates all part of the world  .The designer team at Google has  designed 300 doodles for Google.com in the United States and  700 internationally . Pls check  Entire range of doodles  till date . Here are some of my favorites doodle of Indian Important events , Festivals , anniversaries and days:

40th Anniversary of Sesame Street - Boombah and Chamki – Gali Gali Sim Sim (this one on the demand of my daughter !!!)

The creative minds behind these doodles are open to new ideas from its users  .  One can design his/her own doodle and can submit to Google at proposals@google.com  . Furthermore, Google holds competition  “Doodle 4 Google”  each  year in various countries where school children can participate and show their creativity  . The first ever Doodle 4 Google in India

was launched in August 2009 , where school children were given an opportunity to design Google logo with the theme “ My India “ . The children from 1st standard to 10th standard have participated and after the public online voting, the final winner was decided by Google’s chief doodler , Dennis Hwang ( must click this link and see his other doodles – they are amazing) .The final Indian doodle winner appeared on Google India on Children’s day in 2009 . Winner of “ Doodle 4 Google – My India was Puru Pratap Singh (4th standard, Gurgaon)  whose Doodle represented India as 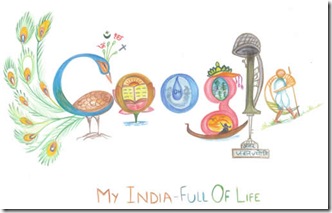 “My India - full of life  -   India is a country which has a blend of thousands of traditions and all religions like Hinduism, Christianity, Sikhism and Islam. It has developed a lot in the past few years. The discovery of water on the moon by the Indian scientists is a proof to this fact. The Indian culture is as vibrant as the colours of the peacock. Kashmir, the crown of India, is as serene as the peace bird and as pure as the lotus. We, the Indian citizens are also trying to fulfill Mahatma Gandhi’s dream of educating each and every Indian child.”

My pick on other finalists among all categories are :-

“ India- Towards Peace “ ( by Haadiyah Afridi) 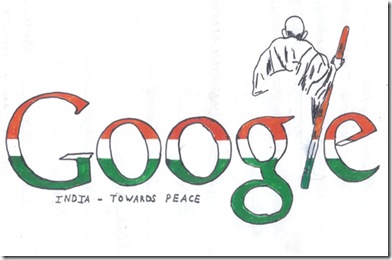 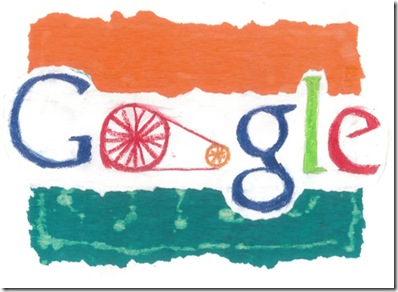 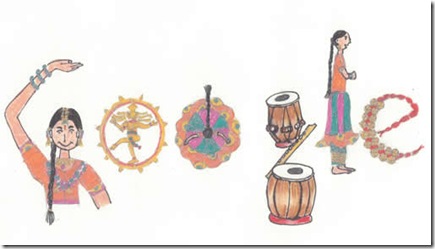 I loved the way Anusha  has described the concept . In her own words:

India means dance and music to me. I use dance to express my feelings. I exercise and refresh myself after school. My doodle represents Kathak, which I am learning for the past two years. Kathak was first performed in the temples and then in the Mogul courts. G: the graceful ‘Hasthaks’. O: ‘Natraj’ the God of dance. O: Flared ‘Ghagra’ in the ‘chakkar’ move. G: Tabla and flute which accompany Kathak. L: Posture in Kathak. My teacher says, ‘stomach in, back straight, heels together and toes apart’. E: ‘Ghungroos’ which add rhythm to the dance. 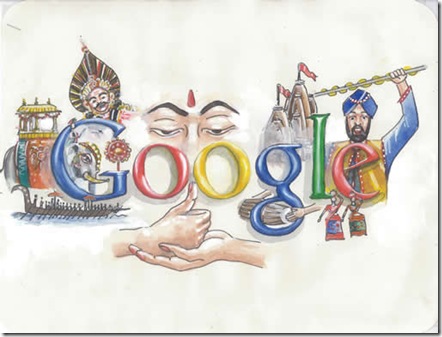 “Welcome to My India “  by Anamika Sonai 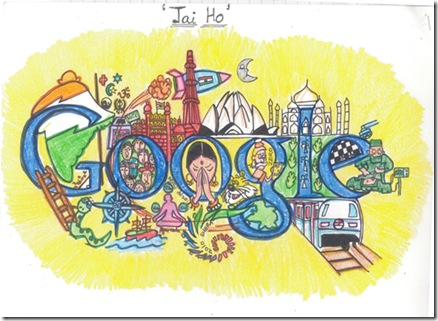 My doodle depicts few of the endless contributions made by India to the world. India has never invaded any country in the past 10,00 years of history and taught the world non-violence and peace by Gandhiji. Aryabhatta invented zero. Ayurveda is the earliest school of medicine. 2600 years ago Sushrutha, father of surgery conducted complicated operations. Pythagorean Theorem was first explained by Budhayana. Chess, snakes and ladders, art of navigation, etc originated in India. I wish that someday with my contributions, I’ll be able to occupy a space in somebody’s doodle as a person who contributed for this lovely country.

“A pot seller” ( by Arushi Agarwal) 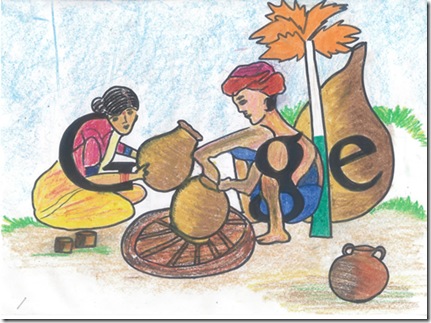 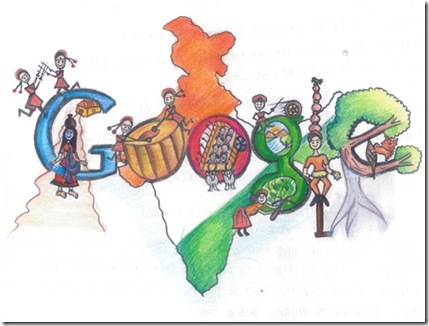 “Bullock cart to Chandrayan I”  (by Shounak Dey) 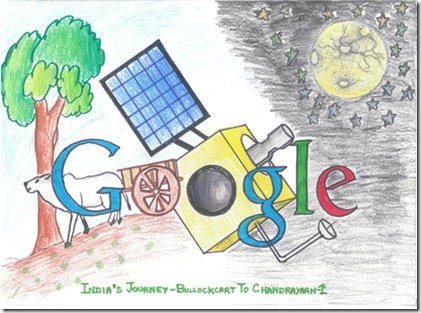 “My India” (by Manmohan Vishwakarma) 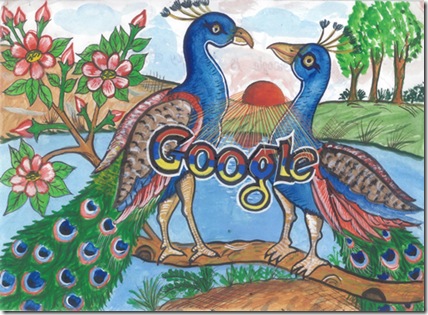 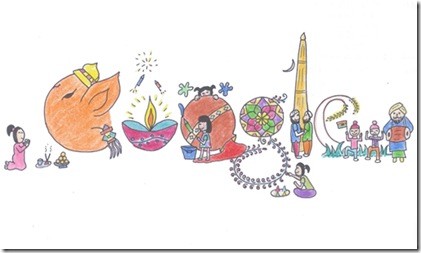 “Our Festivals “ by Aman Malhotra 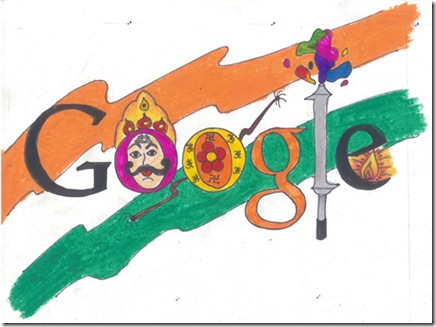 There are so many!!!!!!!  In fact , it was really hard for me to pick up few , honestly  all the doodles created by children are so beautiful  and  have  soul because they tell a story . The kids were  so creative and imaginative.  I think they're the hidden gems of India and it is  great that Google has given them  a platform to show their creativity and talent to other parts of the world . You would love to see all at http://www.google.co.in/intl/en/doodle4google/

p.s.  - I thoroughly enjoyed writing this post ,  I  think children's pure  energy was  reflected in their drawings!!

I have been dying to post on my blog but my preoccupation with work ( not slept for more than 5 hours a day  for almost a week now , late sittings for last  1 month ) is simply not letting me to do so.  I do not know when I will get leisure time . But when I bumped into the site of  lizzie fortunato ,  I knew I  had to post about them no matter what!!!!!

Designed by Elizabeth and operated by kathryn , the team of twin sisters  behind the lizzie fortunato jewels  truly believes that  that fine jewelry is not about diamonds or precious stones, you can still make a Statement jewelry  using recycled materials that will add to the wearer’s allure and  can very well  flaunt a chic look.  They started their venture in 2007 and since then no looking back, they have created line for Victoria Bartlettd, Urban outfitters , Whistle+Flute etc,  Elizabeth  is designer behind the brand  adores traditional techniques – be it weaving, embroidery , cross stitching , she applies   them generously & so beautifully into her jewelry designs . She clearly puts a lot of love into her designs that makes them so striking and unique.

The spring / summer 2010 collection of Elizabeth and Kathryn fortunato, draw inspiration from a voyage to India .  They traveled through out India sourcing fabrics, vintage textiles, stones etc before they launched their latest collection .  The collection titled “ Faded Grandeur” revolves around  past  tales of  romance and majestic life style  of an Indian palace .  The designers have injected a touch of glamour and old world charm to their latest collection . Totally in sync with the theme of their latest crafty collection , the range is revival  of an old era, fine treasures  that celebrates colors  with its spectacular variety of Bib necklaces, bracelets , earrings , etc . 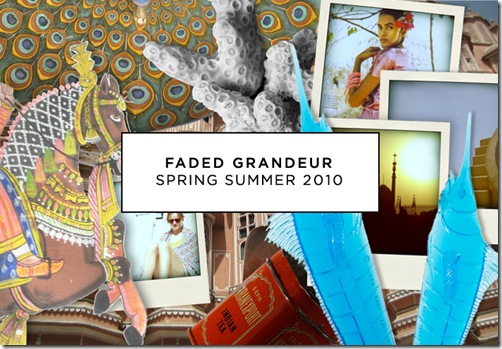 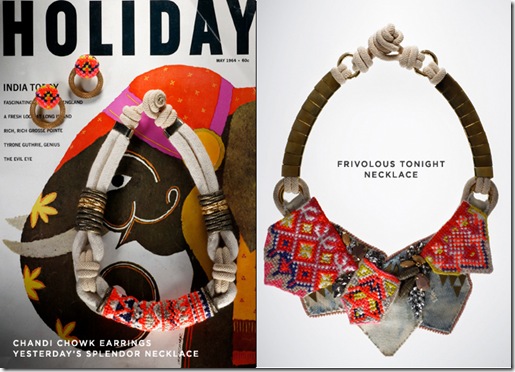 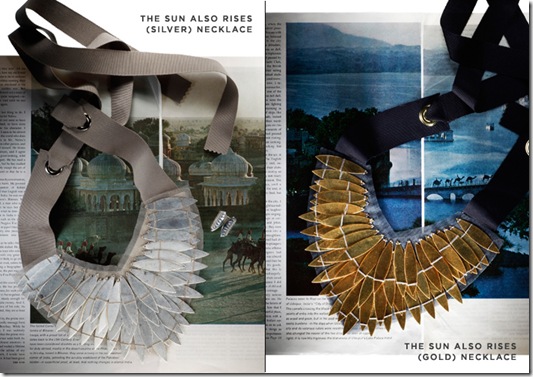 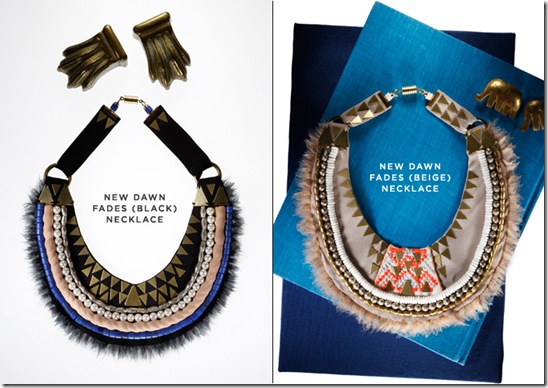 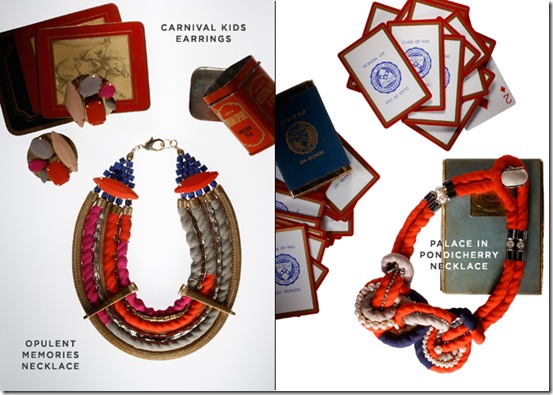 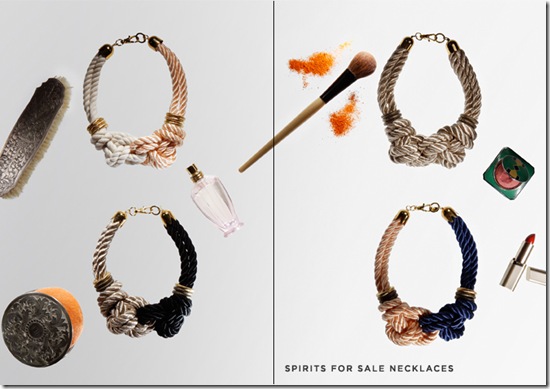 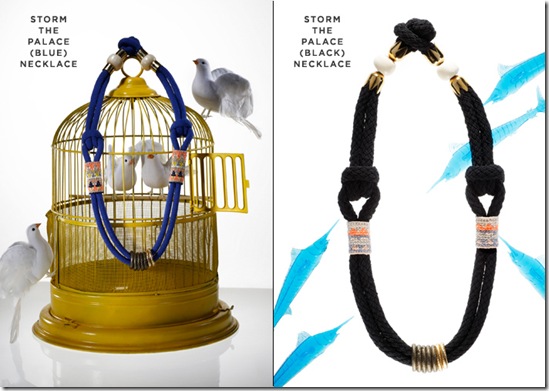 Some of my favorites are “ the sun also rises , opulent memories, spirits for sale , palace in Pondicherry .   For more such fashionable and  striking pieces  please check  www.lizziefortunatojewels.com.

India-inspirit
am product development consultant - Apparels. Worked with stores like Urban Outfitters, Anthropologie, Target Stores, Timberland, Next, Maurices, Rocawear etc; I love anything that is inspired by India, it can be anything from arts, crafts , jewelry, textiles, furniture, home decor with a real Indian touch!!!!!. India undoubtedly has a great, rich cultural heritage where royalty of her Maharajahs and regalities of Maharanis (Queens) exhibit grandeur and matchless lifestyles. This blog showcases the work of artisans, designers, art collectors not only from India but from other parts of the world, where India has been a perennial source of inspiration. Come and explore India and her eternal glory with me through marvelous and magnificent places , royal palaces, rural & urban lifestyle, luxurious hotels , Intricate Architecture, etc. All I can say whatever you would see here, you would always feel – oh yes it is very much Indian or Indian inspired !!!!!!!!!!!!!!!